Lyons, Georgia farmer and Chairperson of the Vidalia Onion Committee Aries Haygood is all smiles when he harvests 750 acres of the Vidalia onions from his sandy soils in east central Georgia. Onions are Haygood’s winter cash crop. “We plant our onion seed beds in September. All our seed is grown in a confined area, and we’ll start transplanting them around November,” said Haygood. “We plant and harvest in a similar time frame as the tobacco guys. In fact, the two men who taught me how to farm, my father-in-law, Mike McKinley and his partner Terry Collins, M&T Farms, grew tobacco on the land I farm today.”

Haygood also grows watermelons, corn, soybeans and, for the first time ever, cotton, which he’ll harvest in the fall of 2021. “I received varietal recommendations from other farmers and a trusted crop advisor that scouts almost 30,000-acres of Georgia cotton so I’m hoping for good yields fiber qualities,” said Haygood.

At 38 years-old Haygood is still considered a young farmer. He believes his crop diversity will swing his overall earnings toward a predictably positive percentage in the long run. With six years behind them as A&M Farms (Aries and Megan Farms), the husband/wife team became big believers in cover crops. Over 60% of their 1,500 acres of Toombs, County farm is blanketed in one or more of several species of cover crop at some point each year.

Many farmers shred their crop stalks and then harrow the stubble under, but not Haygood. Some older farmers might think he is a little crazy. Once the shredded stalks settle, he plants his cash crop directly into it.

“Cover crops are an indispensable asset on my operation. Agronomically, they deliver benefits to my crops across all my fields where they are sowed,” said Haygood. “I have to irrigate but my water costs would be much higher if my cover crops didn’t do such a great job of holding that valuable moisture.” 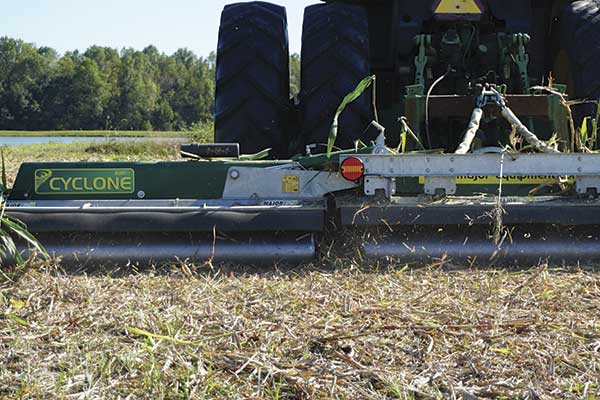 Haygood’s old batwing mower started getting long-in-the-tooth, so he logged on the Internet and began searching for a new shredder he could use to chop crop stalks and mow down his cover crops. “I wanted to chop up my corn stalks and not leave them in wind rows,” said Haygood. “I wanted that shredded material to lay right where it had been growing to provide as much protection as I could from the 35 inches of rain we average each year. I will plant a cover as soon as I can after the previous crop has died or been harvested,” said Haygood.

When he saw a video of a rotary mower manufactured by a company in Ireland, he picked up the phone and called his close friend, Chris Hopkins, a cotton, peanut and corn farmer who also manages Lasseter Equipment of Lyons, Ga., not far from A&M Farms.

“I started telling him all about this rotary mower/shredder from Major Equipment Company in Mayo, Ireland and how he needed to become a dealer for them. He stopped me in mid-sentence and said, ‘Aries, you’re not going to believe this, but I just filled out the paperwork and sent it back to their office.’ That’s how we got on the Cyclone band wagon,” said Haygood. 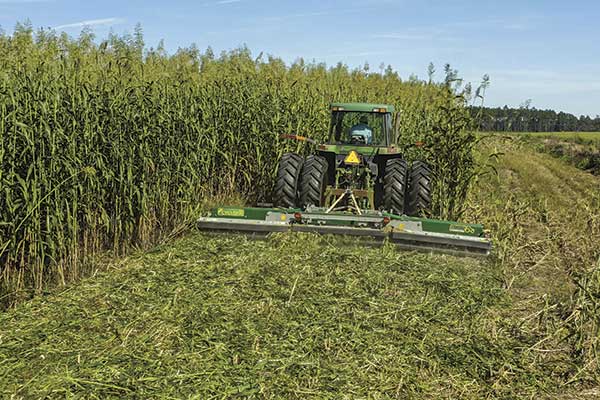 “It went through it like a hot knife through butter”

Through conversations with other farmers through the years, Haygood had always heard rotary-type mowers performed best for stubble management.

“What sold me on it was my enthusiasm for cover crops and needing that type of shredding pattern it delivered,” said Aries. “I went with their 20-foot model, and I quickly found out it requires less horse-power than a flail mower. I can pull it faster with a smaller tractor than I used with my old batwing mower and that dropped my diesel costs instantly.”

Haygood has a video taken in 2020 of the Cyclone going through Sorghum Sudangrass six feet tall.

“It went through it like a hot knife through butter,” says Haygood. “That sold me on it. It just fits my needs around my operation for the crops I produce and the way I farm.” 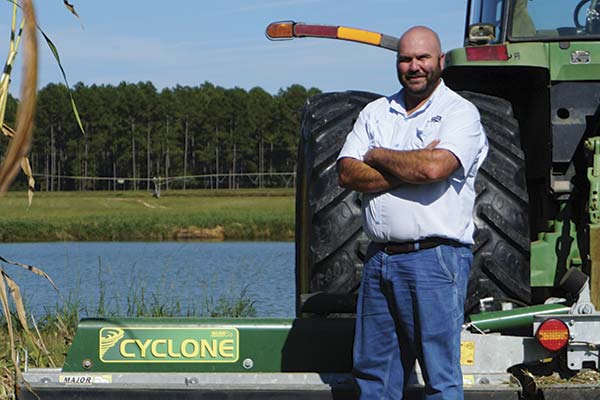