Major Cyclone helps family save over $2800 alone this year.

When brothers Wyatt and Frank Scott returned home to their Lucama, North Carolina family farm after earning degrees from NC State University in 2016, they planted 18 acres of sweet potatoes. This year, 200 acres of the root vegetable will be hand harvested off of 46” beds and they have plans to build infrastructure to expand even further. It has become the farm’s number two cash crop behind tobacco.

The family, which includes their father, Joey, their uncle, Gary, and their mother, Tricia, also produces 700 acres of cotton, a little wheat, 700 hundred acres of two varieties of soybeans (an early group 6 and a group 7 they contract for seed), and corn if the market for it is good. “Our Mom is the real backbone of our home and farm. She maintains all the financials and keeps everyone fed – which is a full-time job in itself,” says Wyatt Scott, who along with his younger siblings Ben and Sarah, grew up raising cattle and showing them in 4-H and FFA events around the state. “We’ve got four full-time employees and collectively we work 2,000 acres of land that varies from heavy clay to mixed sandy ground,” Wyatt says. 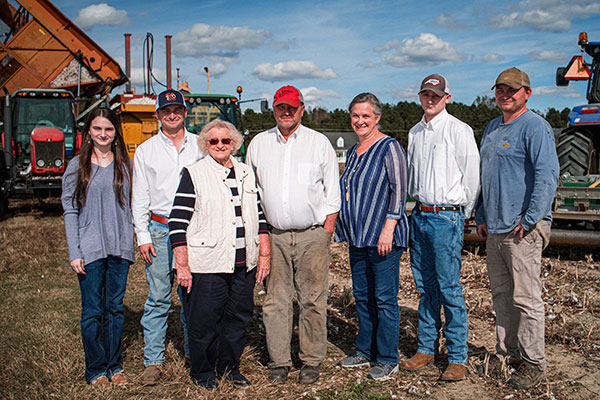 Joey Scott always told his sons that tobacco pays the bills. “We grew 270 acres of it this year and will add 30 more acres in 2021,” says Wyatt Scott. “Tobacco has been good to us, but consumer demand for sweet potatoes has increased, and we’re building some infrastructure to capitalize on that demand and help us grow even more.”

The family currently trucks their sweet potatoes to a local sweet potato packer and shipping operation. “This packer/shipper has an office in the UK and ships sweet potatoes internationally,” Wyatt Scott says. “We recently started producing our own young plants, or ‘shoots’, on the farm that we set out from the middle of May thru June.”

To increase their quality control and give them more marketing flexibility, the Scotts are planning to construct a curing and storage facility in the near future to increase both the productivity and efficiency of their operation.

They keep cotton in their crop mix in part for the agronomic benefits of rotation, and in part because their three cotton harvesters have been paid for a long time. “We’ve seen the new bailer pickers, but we’ve also heard about some of the headaches that come with them. Plus, we really don’t have enough cotton acreage to justify a machine like that,” says Scott, who admits his family has always taken good care of their equipment and conducts in-depth research on anything they contemplate purchasing. “We have a good friend who is a great mechanic and he pulls any needed maintenance on all our pickers between December and January. We’re currently running two John Deere 9965s and a 9970.”

Wyatt Scott’s grandfather, Joseph Franklin Scott, Sr., gave his family some advice when Wyatt was young. “He told us if we take care of the land, the land will take care of us,” Scott remembers. “Through the years, we have applied that wisdom to many things on our operations, especially equipment.”

When the farm’s old 14-foot flail-type mower started getting long in the tooth, Wyatt talked to his local Quality Equipment dealer and friend Travis Lamm. “Travis told me about a cutter/shredder manufactured by Major Equipment Co., called the Cyclone. He was going to demo the company’s MJ30-630 model that has over 20 feet of cutting width at a neighbor’s farm, so we decided to go see it,” says Scott. “Most recently, we had a rotary-style mower that we had to stop using to cut stalks because it would leave large clumps of residue in the fields that remained even after we tilled the ground prior to planting tobacco or sweet potatoes. The Cyclone seems to incorporate the better qualities that the flail-style and rotary-style mowers offer and it and does a better job spreading out that residue than any mower/shredder we’ve used.”

The line of Cyclone mower/shredders are constructed by a family-owned manufacturer in Ireland. “Our neighbor bought it right then and there. I went back home, looked at some You Tube videos of it and in addition to the durable galvanized steel construction, I also liked that hydraulics fold the wings to nine feet, just about the width of the tractor we use,” Scott says. “I can travel down the road in one lane and never have to get on the shoulder to allow someone to pass, which is a big safety advantage.”

With a three-point hitch hook-up, all of the cutter’s weight is distributed between the tractor and the full-length rear roller that promotes stability on uneven ground. “I’m running it on a Holland T7 190 tractor and only hitting 50 percent of the engine load. I’ve yet to bog it down, even when using it on some of our CRP land,” says Scott. “We’ve cut 700 acres so this year and saved about $2800 compared to what we would be spending using the old system. I’ve been running it up to 7 mph, and it’s done a great job mulching and dispersing stalk residue.” 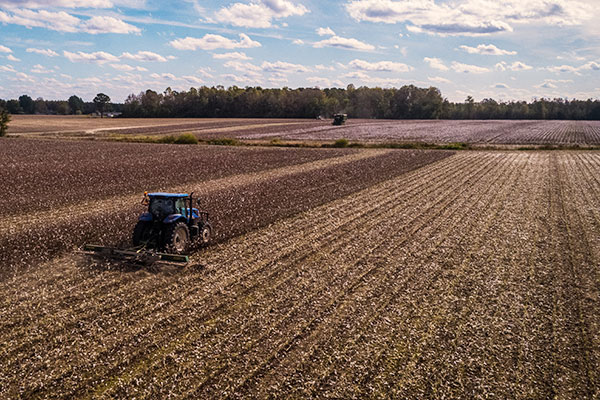 The Scotts like to keep the Cyclone in the same field as the cotton pickers during harvest to shred stalks as they go. “You can pretty much cut seven 36-inch rows at a time. Even when we got into some rank cotton, the height adjustments, which may be changed from 2 inches to 6 ¾ inches, make it adaptable to almost any height requirement,” says Scott. “I also put it through the ringer on some uneven pastureland and it did a good job of ‘flexing’ to follow the contour of the land. I think the Cyclone can be used for a variety of stalk crops that need to be cut and dispersed after harvest – which leads to faster decomposition.”

As Halloween passed, the Scotts had wrapped up sweet potato harvest and were turning their attention to cotton. “Just when the three harvesters were picking as fast as they could, we looked down the road and saw a flatbed truck carrying another Cyclone cutter/shredder that we had ordered a while back. Sometimes, timing is everything,” concludes Scott.

The original article is the cover story in the digital edition of Mid-America Farmer Grower (MAFG) magazine published on Nov. 20, 2020. View here. 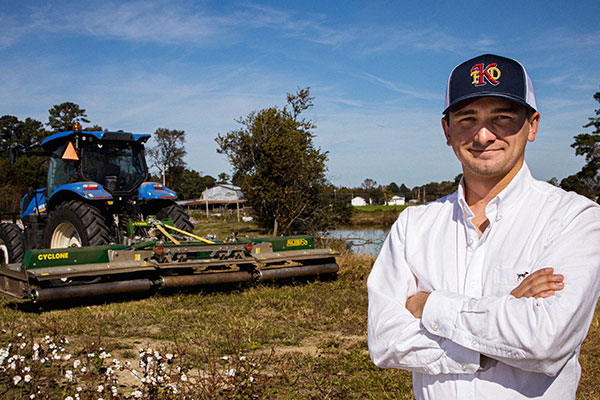